Top 3 Takeaways for CSPs from GEN15

It was a warm welcome in Dallas by GEN15 and their hometown host operator, a little company called AT&T. Nan Chen greeted the crowd in his iconic shades and untucked shirt and leapt straight into The Third Network Vision — a combination of the ubiquity and implicit ease of access of the Internet and the business-level service guarantees that are part of Carrier Ethernet (CE) 2.0 — pointing out that the combination of these two attributes is the basis of the Third Network. From there the event went straight into discussions of the acronyms-of-the-day; SDN, NFV and of course LSO — lifecycle service orchestration — the ‘glue' that makes the third network vision possible.

In terms of numbers, LSO business is predicted to reach over 2.5 billion USD by 2019 which is predicted to include a number of new market entrants as well as evolutionary changes in the OSS ecosystem. However, the foundation of communications remains Carrier Ethernet, with a predicted 60+ billion USD in service revenues for CSPs in 2019.

From the LSO hackathon to the sheer number of virtual CPE displays, the floor was buzzing with chatter about virtualization. Proof-of-concepts (PoCs) featuring virtual functions -- primarily in the areas of customer premise and security -- were both prominent and popular among attendees. This was further illustrated in the panel discussions, where virtualization was clearly a driving force.

Verizon took the stage on Tuesday for the keynote address and highlighted the need to utilize the standards forums to speed up virtual adoption and ultimately improve bottom lines. This spoke to one of the critical ideas behind Infovista's PoC, which emphasizes decreased time-to-market and increased profitability by integrating work from MEF, TM Forum, ETSI NFV, Oracle and Juniper.

Although LSO was a central theme of GEN15, CSPs are just starting to tap the full potential of Carrier Ethernet itself. Taking advantage of a host of efficiency improvements. For starters, they are enjoying the costs savings of replacing time-division multiplexing (TDM). From there, CE's bandwidth for data center interconnect (DCI), cloud computing needs and carrier-to-carrier services is helping grow CSP's CE service revenues to more than 40 billion USD. 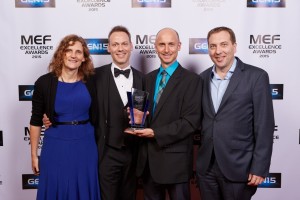 Now that CSPs are delivering business class CE-based services, their customers want guarantees, visibility and intelligence. In my discussions with product development and management from CSPs across the globe, all cited capacity and scale, engaging visualization, real-time metrics and standards-driven KPIs as driving their needs.  The next step for CSPs will be providing insight into their customer's application performance. After all, the business services customer purchase's connectivity services for their applications.

From last years' inaugural GEN14 Proof-of-Concept showcase featuring six projects including ours, GEN15's showcase doubled to twelve! Assurance, one of the three pillars of the MEF's Third Network Vision was a key component in half of these PoCs.  As a leading performance assurance solution, ours was no exception as we evolved our original PoC from GEN14 to incorporate vCPE and dynamically scaling vPE. The primary goal of the PoC is to provide a blueprint of how CSPs can transition to SDN and NFV-based network services using LSO-principles. We are therefore, very proud to have received the MEF Excellence Award for Third Network Technology of the Year — Multi-Vendor Innovation alongside Oracle Communications and Juniper Networks.

Watch this brief vLog from the PoC's thought leaders and champion CSPs that helped guide the PoC's design and ensure its business value. I also invite you to download our Zero Touch, Business-Ready NaaS 3.0 with vCPE over an Elastic Network data sheet to learn more about this PoC.

Mr. Cullan serves as Director of Product Marketing, Business Services Solutions for InfoVista's service assurance solutions for communications service providers and their business services. Mr. Cullan has spent close to 20 years in the IT industry, 15 of which were spent in a consulting capacity working for both a large IT services multinational and later a small boutique firm focused on the healthcare industry. As a network architect, he has provided design, implementation, integration and project management services to the financial services, utilities and healthcare sectors. Mr. Cullan joined InfoVista in 2006 to provide pre-sales services for InfoVista's Canadian territory and strategic U.S. accounts before becoming product marketing manager. He was among the first group of individuals to secure his Carrier Ethernet Certified Professional designation from the Metro Ethernet Forum. Mr. Cullan is based just outside of Toronto, Canada and received a bachelor of mathematics degree from the University of Waterloo.