Are Pedestrian Test Systems Safe to Use?

InfoVista's rigorous approach to SAR testing for walk-testing equipment contributes to industry knowledge, best practice and the safety of engineers and the public.

At InfoVista, safety is of paramount importance. We understand there have been concerns regarding the safety of walk-testing solutions in relation to energy emission levels, for both field engineers and the public at large. As a result, we've conducted deep research to ensure that our solutions adhere to the required standards. Here's what you should know.

The TEMS Backpack is InfoVista's industry-leading solution for walk-testing buildings and urban campuses such as malls, convention centers, airports and stadiums. Such solutions are used to obtain accurate field measurements to help optimize coverage and ensure effective network performance.

Typical walk-testing of a building involves using numerous devices to simultaneously test each radio frequency band, as well as scripted control of tests so that all necessary services are measured (for example, data services such as web browsing and FTP; call services including cellular, VoLTE and VoWiFi; streaming services such as YouTube; short messaging; and so on).

In practice, the walk tester wears the backpack while walking through every floor of the building. With larger venues such as airports, this can often require more than a day. Because of issues with building security and cost of manpower, the goal is usually to complete the walk-testing in a single visit, and the activity may include real-time adjustments to power levels for optimization of handovers, coverage, and link balance, as well as verification that these changes have delivered the desired results.

Another consideration for in-building design is close coordination with the networks external to the building, so macro site ingress is measured and walk-tests around the building may be performed to measure small-cell signal egress or to verify the macro-to-small cell handover zones. 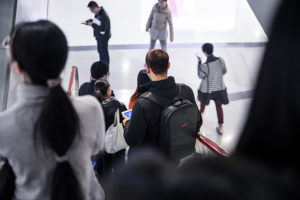 The TEMS Backpack is a configurable system, with a maximum capacity of 6 smartphones and a scanning receiver, all battery powered for 8 hours or more of continuous operation. 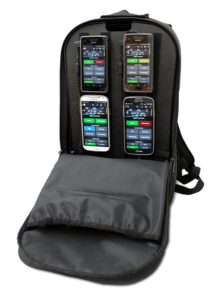 SAR (Specific Absorption Rate) testing is required for transmitting devices that operate within 20cm of people's heads or bodies. This is a measure of the energy entering a person's body from the device when operating at its maximum output power (accounting for any on/off duty-cycle). The tests include the device's antenna gain. If the device can transmit with multiple transmitters simultaneously (or multiple devices operate simultaneously), then the worst case combinations must be tested. There is a SAR Test Exclusion that allows devices that meet a specific test not to have to undertake full SAR testing, but this exclusion is still based upon captured measurements, so at least some testing is required.

While each individual transmitting device in the TEMS Backpack is already tested by the respective manufacturers to make sure that users will not be absorbing too much radiation while using the device, there have been questions raised about the aggregate energy for all the devices working simultaneously in the solution that might be experienced by someone wearing the backpack while walk-testing.

The backpack itself has no transmitting function. Cellular phones are usually tested for emissions to the head (phone-to-ear usage); the torso (body-worn accessory); or to an extremity (hand-held speaker mode usage), using a variety of appropriate human models. The backpack is not very close to the user's head, nor is it handheld, so a torso emissions test is appropriate for the backpack.

While most of the devices in the backpack are capable of WiFi, the walk-testing is usually done with WiFi disabled so all the services are forced onto cellular service. This simplifies the possible simultaneous transmissions from the devices. The same is true of Bluetooth, unless the configuration is for the TEMS Pocket product that uses a Bluetooth network for device control.

In the United States, the radiation level tests are specified by the FCC (4)(5)(6)(7)(8), based upon a general procedure developed by the IEEE (1). The standards for safe levels of RF energy were specified by the IEEE and ANSI (2) and were also adopted as Health Canada's Safety Code 6. The US standard is the second such safety standard, having been based upon an earlier standard dating from 1982, but now features tighter restrictions on levels and proximity to devices, as new research has refined the understanding of biological effects of radiation.

Both standards are based upon an extensive and growing body of experiments and epidemiological studies, performed over many years. The destructive effects of ionizing radiation, such as X-rays, on people's tissues are well known, but non-ionizing radiation, such as is encountered from the use of cellphones, has different effects. According to the available research, “there is no reliable scientific evidence that continuous exposure to low intensity RFEM fields with whole-body averaged energy absorption rates (i.e., specific absorption rates or SAR) less than 0.4 W/kg results in damage, irreversible or otherwise, to biological molecules and tissues.”(3) Despite this, the IEEE considers that further research is required, as there is insufficient data to form a definitive conclusion. The peak spatial SAR exposure limits for the United States in the 1992 standard, for head and body, are:

These thresholds are the time- and space-averaged values, measured within a cube weighing 1 gram. The European Union has similar limits, but uses 10g cubes.

Since the TEMS Backpack may (and probably will) be used in the presence of the general population of people as well as the occupational backpack wearer, the tighter threshold was used as the limit in our testing.

Measurements are made with an E-field (Electric field) probe, and SAR values are calculated according to an equation:

Ïƒ is the conductivity of the simulated tissue, in siemens/meter

For SAR testing, a model substitutes for the real tissues of human bodies. This model uses a head or body-shaped shell filled with an engineered liquid that has electrical conductivity and permittivity similar to human tissue. In order to measure the signal levels at different “tissue” depths and at all locations in proximity of any of the devices in the backpack, a robotic arm is programmed to move the probe inside the shell at different depths and locations 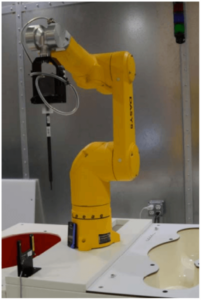 An example of the type of SAR measurements produced for cellular telephones is shown in Figure 4. A two-dimensional scan is performed to find the highest signal levels, then additional scans are added to produce the 3D slices that confirm the hot-spot location in three dimensions. 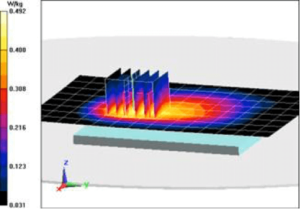 Figure 4: Example 3D image of E-field strength of a phone

In the SAR tests, each device is made active and measured in turn (single transmitters). The peak measurement locations are found from each device. If this meets the SAR limit, no further test is necessary for that mode. If this exceeds the SAR limit, further testing in 3 dimensions is performed (volumetric and zoom scans). All of the testing is repeated for every different band of operation and type of radio technology (GSM, UMTS, CDMA, EVDO, and LTE for the units tested) for a total of 17 different tests. Not all devices can support all the bands and technologies.

Figure 5 shows the backpack in a position beneath the body shell to test the upper-most device on the left side. The measurement probe is not visible, being above the shell containing the tissue simulation liquid. Figure 5: Testing the device located in the upper-left position.

For the United State, the SAR Test Exclusion applies if:

There are different equations used for Canada and the European Union, but they both have similar exclusions.

The simultaneous transmitter sum calculations showed that the TEMS Backpack produced a maximum of 0.09 W/kg, well below the limit for uncontrolled (general) population and is therefore considered safe for both the operator and people in close proximity. InfoVista treats potential safety issues, for both field engineers and the population at large, with the seriousness they deserve. Our test results are clear and have been rigorously performed and reviewed. If you would like further information regarding either our methodology or our results, please do not hesitate to contact us!