Our commitment to you, during the COVID-19 crisis

A message from our CEO, José Duarte

At the same time that mobile networks are gaining complexity at an unprecedented pace, the pressure is on for mobile operators to deliver on equally inflated subscriber quality of experience (QoE) demands.

It's no secret that the mobile market has reached a saturation point. Subscribers now have more options for mobile connectivity than they used to, which has made network performance a top priority for network providers. Now that wireless users are holding onto their devices for longer than ever before, providers can no longer secure new subscriptions — and higher revenues — by offering device upgrades or bundle packages. Rather, subscriptions are won or lost based primarily on network quality, which, in today's mobile landscape, requires constant monitoring and RAN optimization from operations teams. 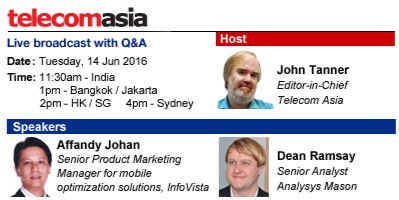 To help network operators who are feeling this squeeze, we'll be holding a webinar in collaboration with TelecomAsia to discuss the benefits of a unified optimization solution that keeps both the network and subscriber in mind during RAN planning and optimization. We'll be joined by TelecomAsia Editor-in-chief John Tanner as our moderator and fellow speaker Dean Ramsay, a senior analyst with Analysys Mason on Tuesday, June 14, 2016.

Both Subscribers and Networks Are Growing More Complex

It's not just subscriber needs that have shifted over the past several years, as networks themselves have been evolving constantly of late. QoE assurance used to entail monitoring basic legacy network technologies that carried a steady but manageable number of active users at any given time. New topologies and technologies like 2G, 3G, 4G and VoLTE haven't replaced legacy technology but instead have been layered onto each other with each new introduction. This has made quality assurance markedly more cumbersome with each subsequent technology introduction — a trend that will only continue with the introduction of 5G.

At the same time, wireless has become ubiquitous. This has meant that not only are operators responsible for monitoring networks in place, but optimizing the RAN constantly. These responsibilities include monitoring for traffic crests and lulls on the RAN, scaling bandwidth between different network points accordingly and mapping out small cell installation for future network use, to name just a few.

This massive scope may on the outset seem untenable, but mobile network operators need to zero in on their subscribers to make sure that lagging QoE doesn't hit their bottom lines where it hurts most. Ensuring that QoE expectations are met begins with making sure operators have a constant view of all network layers and activity in as unified a setting as possible in order to isolate RAN related problems with subscriber and event location intelligence.

To learn more, join us for the webinar at the following times, depending on your location: