The Effects of QoS on Cellular Capacity

“You know, a cellular network with QoS is a little like the mule with a spinning wheel. No one knows how he got it, and danged if he knows how to use it!”

-Bastardising Lyle Lanley's quote about ‘a town with money'

A typical conversation between different groups in a cellular operator (say products, finance and engineering) might go something like:

I should note that this article is written from the viewpoint of an engineer and in the spirit of honesty, it is entirely possible that the finance department don't cackle manically as they refuse yet another request to spend money that the business doesn't have. It is, therefore, very important that the engineering department have access to tools and information that allow them to make reasonable and well justified requests for additional CAPEX, especially when dealing with augmenting network capacity.

The focus of this blog post is to describe why Quality of Service (QoS) is not a useful tool for solving capacity issues, and can, in fact, decrease overall network capacity.

When this article refers to QoS, it's actually talking about ‘Differentiated QoS'; mechanisms that get put in place to provide differentiated performance between classes of users and/or services.

In a fixed network, resources can be managed in a predictable and deterministic manner. This means that the relationship between QoS and capacity is an amicable one.

For example, imagine a fixed network that has a capacity of C (and for the sake of using numbers, let's say C = 10Mbps). If we then pretend that capacity is a pipe (making the internet a series of tubes):

If there are 5 (full-buffer) users and resources are shared fairly amongst all users, then each user will get on average 2Mbps.

Likewise, if there are 10 users then on average, then each user will get on average 1Mbps. 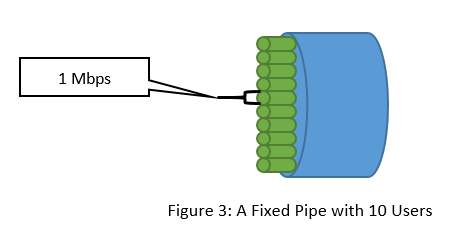 Differentiated QoS can be used to give more bandwidth to one class of users at the expense of reducing the bandwidth given to other users:

Whilst amount of capacity (C) doesn't change, the prioritised users are made happy at the expense of the remaining users.

Things are simple in a fixed line world, however when we talk about wireless/radio, things get much more complicated. 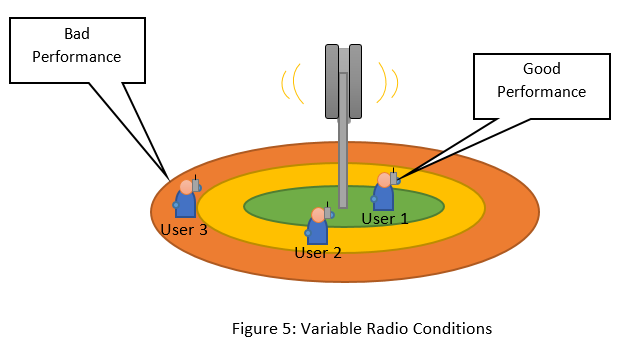 To further complicate this, radio conditions fluctuate quickly due to a phenomenon known as fading.

The above diagrams shows that on average User 1 is in better radio conditions than Users 2 or 3. However, there are periods of time when User 1 is in ‘a deep fade' and Users 2 or 3 briefly experience better radio conditions. A smart radio scheduler can exploit this fact for capacity gains (known as a ‘scheduling gain'). So, unlike in the fixed line world, wireless channel capacity (C) is not a constant, it depends on different factors including:

On the flip-side, the Equal Rate scheduling algorithm is perfectly fair. This algorithm schedules users in bad radio conditions more frequently than those in good radio conditions. This ensures that all users get approximately the same user experience (user throughput). Unsurprisingly, this is not an efficient approach from a capacity perspective.

A compromise between these two extremes is the Proportional Fair scheduler. This algorithm schedules users in good radio conditions most of the time, but also occasionally schedules users in suboptimal radio conditions to make sure that nobody is completely starved. This tends to be the best trade-off between capacity and fairness and is typically what mobile operators use.

This variability in channel capacity means that using Differentiated QoS to prioritise a class of users can materially affect channel capacity and the manner in which capacity is affected can be somewhat unpredictable.

All of the above leads to the following observation — QoS is not a panacea that can be used to improve cell capacity, in fact introducing QoS tends to reduce available capacity and this costs money. There are certainly legitimate uses for QoS, particularly for managing Quality of Experience (QoE), these include things such as:

Properly understanding the effects of QoS on capacity and performance in a wireless network is a complicated endeavour, beyond the scope of either a pen and paper study or excel spreadsheet modelling. An ever more common approach used by sophisticated wireless operators is to use tele-traffic simulations customized to their customer experience KPI targets. These simulations allow call arrivals and departures to be simulated and the QoE for individual users modelled. The basics of tele-traffic simulation and how it can be applied to ‘what-if' capacity modelling will be the subject of a forthcoming blog entry.