Earlier this year, my colleague Régis Lerbour published an introductory blog post on network lifecycle automation (NLA) and how it could boost the telecoms industry in the 5G era.

Highlighting some of the drivers behind the emergence of NLA, he summarized the problem CSPs are starting to face – and the solution – thus:

“5G has presented operators with a conundrum: how to focus on deploying and investing in the future – network slicing, ultra-low latency, Industry 4.0 – while continually improving operations for 4G, the technology on which their customers still depend. That’s where automation will help. Automation will allow operators to break out of the chicken-and-egg quandary by automating manual tasks associated with daily 3G and 4G operations, so they can focus on deploying the future, faster.”

To illustrate some of his observations, Régis reviewed a handful of stats from an extensive but unpublished report, one for which Infovista commissioned Forrester Consulting to survey 104 senior CSP strategy decision-makers from large companies around the world to investigate their understanding of the many conceptual and technological facets of NLA, and how they plan to adopt it.

Building on Régis’s overview, in this blog post I dig deeper into the report’s data to demonstrate how the industry is familiarizing itself with and preparing for the imperatives of network lifecycle automation, something for which I hope my many years as an industry strategist will equip me.

In the context of some of the most illuminating questions in the survey – which was split between representatives of telecommunications services (31%), technology and/or technology services (28%), wireless carriers (24%) and internet services providers (ISPs) (17%) – we’ll explore these key themes that coalesce under the banner of network lifecycle automation:

Phases of the network lifecycle

At Infovista, we categorize the network lifecycle phases as planning, deployment and operations. For the most part, all other phases can be considered subcategories of these.

In Figure 1 we see answers to a question about the potential NLA functionalities survey respondents consider important. These speak to how they view phases of the network lifecycle. Let’s take a look.

I wouldn’t necessarily have predicted benefits related to strategic planning would make the top spot. Clearly, it’s an important component of the network lifecycle, but it’s only one part, and on a day-to-day basis, automation is likely to be used more in other areas, not least service assurance. But it underlines MNOs’ keenness to set their networks off on the right path, and automation is crucial for this, given the complexities of rolling out 5G.

Having positive user experiences, good E2E Service Assurance and optimization, ranked 2, 3 and 4 respectively, are as expected.

Regardless of order, it’s clear from these numbers that the three broad phases – planning, deployment and operations – are all ripe for automation.

Automation in the context of other tech priorities

So, let’s look at automation, which featured in many questions in the survey, including the first (Figure 2), in which we asked respondents’ what their organizations’ top infrastructure/network priorities over the next year were. 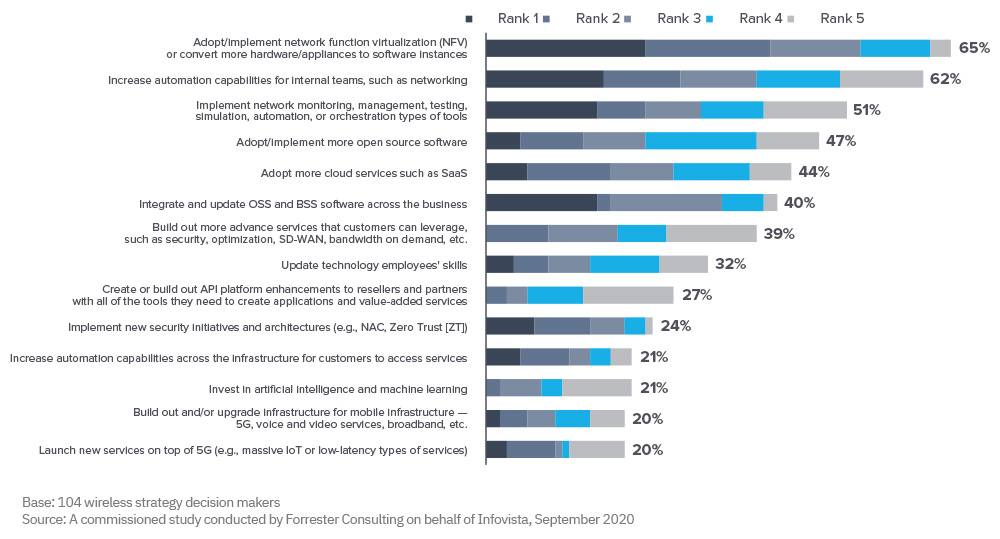 While it’s no surprise to see network function virtualization and automation at the top, both being key to today’s networks, it’s reassuring to have it confirmed by the industry. It’s also worth noting that NFV is often blurred in people’s minds alongside the concept of cloud-native architectures, as NFV is best deployed in the cloud. (See more about this in the full report.)

But perhaps most interesting here is what the lowest priorities are.

That mobile infrastructure for 5G is so low is surprising and unexpected. Though it’s possible that respondents were deferring it for two years, the most likely explanation is that they had already started on their 5G deployment at the time the survey was conducted.

The lack of prioritization assigned to AI and ML suggests that industry awareness of the impacts on automation of these technologies might need to be increased; there will be a significant reliance on both AI and ML.

Security’s poor performance is another common and often repeated theme. People see it as low priority and a cost. It is a cost – but a necessary one. And both the industry and commercial world in general need to invest in it more.

Finally, employee skills don’t rank very highly. How do companies expect to embrace new technologies without training their workforce? They’re assuming that either their staff will learn enough on the job, or, more likely, they expect independent software vendors to ‘abstract away’ these difficulties – which, in the case of some ISVs, will be the aim.

Download the full survey to see how these priorities change over time.

Later in the survey (Figure 3), we ask which of a list of challenges respondents experience with the set of management tools they already use. 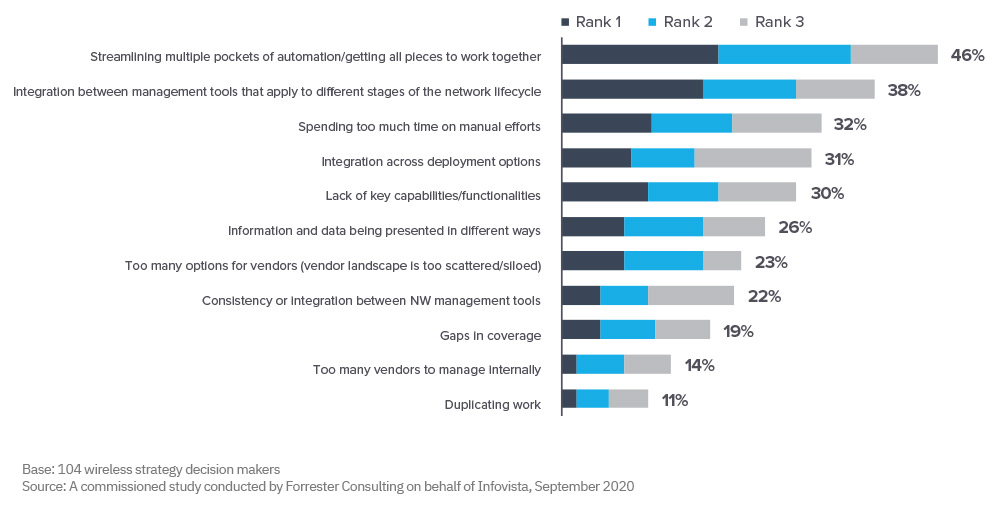 Answers to this question bring into sharp focus what needs to be done: improve automation and integration across the network lifecycle.

This brings us to what I call the ‘reality view’, derived from a question (Figure 4) on how the challenges above have impacted respondents’ businesses. 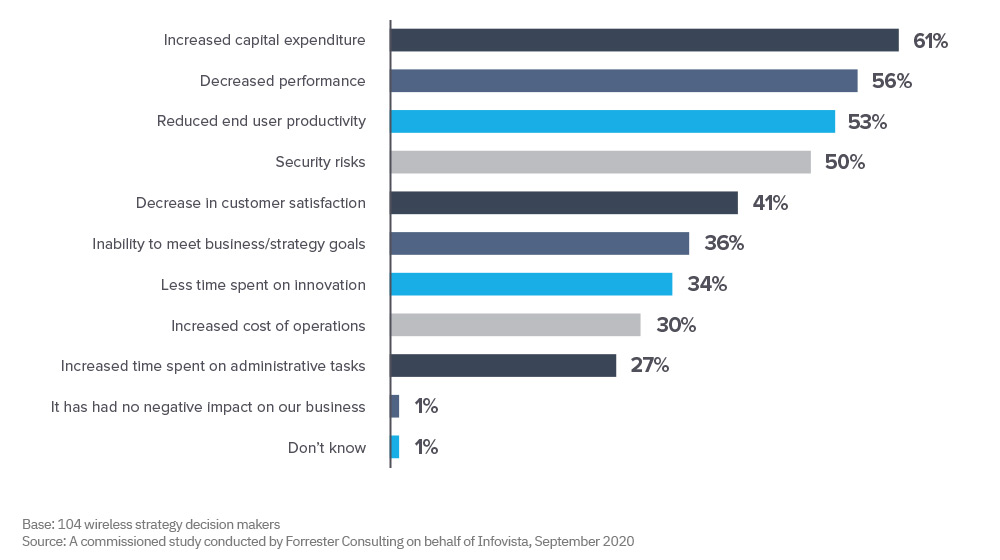 These answers reinforce the notion that change always comes at a cost but that the benefits don’t always match the hype.

Respondents have clearly been burned by their suppliers, with performance falling short of their expectations. This is likely to have made them somewhat jaded.

Savvy vendors will want to reverse this trend, particularly in the service assurance space.

While we can see from earlier answers in the survey that there’s a thirst for automation tools, vendors must deliver on their promises.

Becoming cloud-native: the process of cloudification

No discussion of automation would be complete without touching on cloudification, as our question (Figure 6) on what benefits a cloud version of NLA tools might bring shows.

The key takeaway from this is that respondents are demanding that the cloud makes things work.

Downtime avoidance comes from respondents’ increased resilience and ability to offer services to their customers.

While all parts of the network are important, if a RAN base station fails, it affects a small number of subscribers, whereas if a core network element fails, it can affect millions of subscribers.

This is a huge issue, whether technical, financial or commercial. Cloudification reduces the risk significantly, and that process is facilitated by automation.

It’s reassuring that respondents don’t place cost savings too high on the list. Cloudification and automation will lead to reduced costs for operators but, realistically, it will only be achieved in the medium term. It’s good that the industry ‘gets’ this.

Ultimately, these answers illustrate respondents’ pain points – they get kicked when things fail! – and they are banking on the cloud to help solve that problem.

Bringing this analysis from the field together with network lifecycle automation

In his introductory blog post Régis suggested that network lifecycle automation solutions would appeal to “operators who are currently challenged by the expensive delays created by siloed teams, data and solutions” and that they’ll “automate the workflows and operations between the various phases of the end-to-end network lifecycle, leveraging the strategic efficiencies of AI, ML and interoperability in a cloud-native environment”.

Answers to the survey, both those we’ve reproduced here and the wider set of analysis from the field in the full report, suggest that the market is ready and eager to put such solutions into practice to reduce complexity and improve productivity, thereby minimizing outages and speeding up their innovation.

What's the industry's view of NLA?

Gerard Carroll is a strategist at Infovista, where he brings 25+ years of industry experience to the role. He is acknowledged as an expert in analytics, machine learning, service assurance and telecoms, and a noted speaker at telecoms conferences. His career has taken him all around Europe, with stints at Ericsson, Verios, Empirix, and TheNowFactory, among many other companies.