Earlier this month on Super Bowl Sunday, more than a million football fans descended upon San Francisco to watch the Denver Broncos defeat the Carolina Panthers in what was one of the most-watched televised events of the past year. While the number of people tuning in at home may have set a new benchmark, the shear mass of fans texting, tweeting and sapping up mobile network bandwidth in San Francisco the week leading up to the game was record-setting in its own right.

According to stats from AT&T, the company has seen wireless demand increase 75 percent year-over-year at regular-season NFL games. That means that ahead of the NFL's championship throw down, the company was going to be tasked with having to facilitate the use of more than two terabytes of data — up from the previous record of roughly 1.7 terabytes set at last year's Super Bowl. 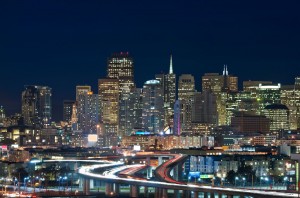 The reason for this increase in mobile data demand is that the habits of smartphone users tend to get reversed during major festivities like sporting events. Usually, users are doing more downloading than uploading with their devices as they consume media rather than share it. This isn't the behavior of the average tourist — especially during a major media event, where visitors are sending photos, videos and audio of what they are seeing to interested parties the world over.

During the event, mobile operators planned ahead to predict — based on usage patterns from previous Super Bowls — when the largest upticks in mobile network bandwidth demand would come through. During the kick off and at the start of the halftime show, for instance, more people are filming, photographing or recording the spectacle to share across the globe than at any other times of the game.

Beefing up mobile network infrastructure ahead of the big game

To meet the mobile data demand, both at the stadium and throughout the Bay Area, mobile operators made significant upgrades to existing network coverage at all of the major regional airports, hotels and high-traffic zones within San Francisco.

For instance, T-Mobile reportedly added capacity on 150 cell sites and improved its antenna arrays locally. At the same time, Sprint not only increased network capacity and coverage through more distributed antenna systems, but the company also brought 11 mobile cell sites on wheels — tech usually reserved for natural disasters — to San Francisco for the game and dispatched them at areas of high foot traffic.

Aside from that, many of the multi-million dollar installations are permanent. This allows Bay Area residents to enjoy improved mobile service and data performance long after game day. Because of these overhauled, higher-capacity network infrastructures, networks in the region are now better prepared for the onslaught of bandwidth demand that is bound to pose challenges for providers with the upcoming arrival of 5G.

All of these upgrades add a great deal of complexity to each operator's network, which will make managing quality of experience (QoE) harder than ever. This is a challenge that operators will need to address not just during major sporting events and festivities, but also for everyday data usage as data demand continues to rise. I invite you to read a blog post from my colleague Sergio Zveibil that highlights how subscriber-focused mobile network performance management allows operators to achieve this. Operators can prioritize network problems, so subscribers, particularly those that are considered VIP, have the best possible experience whether they are watching the Olympics or streaming a business presentation from their phone.