Is Pokemon GO Taking Over Your Network? 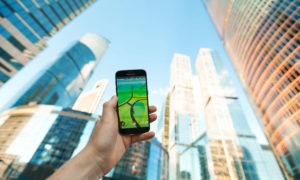 People have been reported falling off the edge of an ocean bluff in California, ending up in ER with a fractured fifth metatarsal bone in the foot after slipping and falling into a ditch, crashing into a tree, exiting a moving vehicle, being struck by a car, mugged in Missouri, and robbed in California. Now police departments in major cities all over are issuing alerts for people to be alert at all times and cautious of being lured into a bad situation. What is going on?

Sure, PokÃ©mon GO is free to play, but since it requires an active data connection to play, the popularity of the augmented-reality game will not only be a nightmare for those who fail to remain aware of their surroundings (not to mention those without an unlimited data plan), but also a nightmare for mobile network operators already struggling to address increasing strain on their data networks in densely populated urban areas in countries around the world, including US, Australia, New Zealand, Germany, and the UK. In fact, PokÃ©mon GO is reported to have surpassed Twitter with respect to active daily users.

Because PokÃ©mon GO requires the player to move around in order to score points, much of the spike in data usage will likely occur in densely populated pedestrian areas. However, since 80% of data traffic occurs indoors, you can bet a significant amount of spike in demand on data networks will occur indoors as well. These spikes in data usage from PokÃ©mon GO are surely going to result in network capacity issues, creating a poor quality of experience (QoE) for players and non-players alike who are connected to the same cell site.

To prepare for PokÃ©mon GO and the future of augmented-reality gaming (and other augmented-reality use cases), MNOs, in partnership with enterprise and commercial business sectors, must continue to densify their networks in densely populated urban indoor-outdoor areas through deployment of small cells, DAS, and carrier Wi-Fi. To do this, it is necessary that RF systems engineers be equipped with the tools they need to plan, design, deploy, optimize, benchmark, and monitor mobile networks. MNOs and RF systems engineers are already using many TEMS solutions today as part of their network management arsenal, including TEMS Investigation, TEMS Pocket, and TEMS Discovery.

One of the newest additions to the TEMS portfolio is TEMS iBuildNet, a superior all-in-one tool for planning, designing, and deploying indoor-outdoor, multi-RAT heterogeneous networks (HetNets) in densely populated urban areas, areas where PokÃ©mon GO players roam around collecting PokÃ©mon while being constantly connected to the mobile data network. Not only is TEMS iBuildNet the premier choice in HetNet planning and design software, it has been proven to reduce planning and design time by as much as 50%, with simulation-to-real-world measurement comparisons within 5dBm margin of error over 90% of the time.

While you may not be able to stop PokÃ©mon GO from taking over your network, you can stop it from causing poor QoE for PokÃ©mon GO players and other mobile end users, who rely on your network to provide consistent, high-quality throughput speed and quality everywhere they GO.

Contact us today for a no-cost, no-obligation demo of TEMS iBuildNet.